WHAT’S THE PURPOSE OF LIFE? It’s been 120 years since William James resolved to tackle this question by leaving his Harvard psychology lab and sailing to Hyères, France, to ensconce himself in the velvet-crystal sanatorium of Frederic W. H. Myers, a paranormal researcher with a live-in spiritual medium, Rosina Thompson, of such sexual charm and blatant hoaxiness that other clairvoyants bemoaned her as a discredit to their profession. When James emerged after many months of musing from Myers’s spa of ill repute, the metaphysical answers he brought with him scandalized both the scientific and the priestly establishments. The scientists were appalled by James’s vigorous commitment to credulity. He not only accepted the reality of spiritual experience but delved so trustingly into its ecstatic fringes that he proclaimed his willingness to “bet heavily” on the “tremendous cosmic import” of telepathy: “I am positively persuaded that we dip our roots into a common pool where minds communicate, by gleams and flashes.” The priests, meanwhile, were aghast to hear James declare that religion’s real stuff was not doctrine but feeling. God’s commandments were of no matter — nor, indeed, was whether God existed at all. The intricate theological opinions that monks, Brahmins, and other ink-fingered scholiasts had cannoned against atheists (and each other) were as ill fitted to actual faith as the wars and hell-sweats they’d occasioned. The true Church was the choice to believe “that beyond each man and in a fashion continuous with him there exists a larger power. […] Anything larger will do. […] It need not be infinite.”

Since James breathed this iconoclasm from an Edinburgh lectern during his 1901–’02 Gifford Lectures (subsequently published as The Varieties of Religious Experience), many of his other ideas have gone mainstream. Large swaths of the general public now accept that the human brain is an evolved psychological contraption for serving its own material ends. Pragmatism and innovation have transitioned from Machiavellian evils into the common sense of governments and corporations. Yet James’s conclusions about life’s ultimate point remain as scandalous as ever. There is not a single preacher among the world’s major religions who would allow the Almighty to be defined as a bit larger than a human. Nor is there one solitary National Science Foundation grant for studying telepathy. The “common pool where minds communicate” remains as un-fundable a research topic as Ectoplasmic Necromancy.

Yet now Lisa Miller has authored The Awakened Brain: The New Science of Spirituality and Our Quest for an Inspired Life. In this accessible and revealing book, Miller doesn’t mention James, but The Awakened Brain is nonetheless firmly in the scandalous tradition of his Varieties. Like James, Miller marries a scientific method with active openness, daring to venture into territory that will prompt some fellow psychologists to fret that she has pulled a Rosina Thompson on her profession. Not content to document the public health benefits of spirituality, she quests for the ultimate origin of the EEG wavelengths detected in the posterior brains of worshipping clerics — and connects it to lightning bolts in the ionosphere: “The same wavelength of brains in meditation or prayer […] is the wavelength of the oneness of all life.”

Despite this Jamesian determination to keep science open to the incredible, Miller does not recycle James’s psychological take on spiritualism. She says things that would surprise him, and her book is full of new research, much from the past decade. But Miller and James fundamentally converge on the rogue opinion that spirituality is a choice made possible by our material brain. That organ has evolved a willingness to entertain, in James’s phrase, “the chance of salvation,” a chance that, like any chance, is a free opportunity, not a compelled inevitability; even in the most intense moments of spiritual possession, the acolyte must opt to “let go” and self-surrender to a power greater. Or, as Miller puts it during a discussion of the fact that some of us are less genetically predisposed to spiritual faith: “Biology is a contributing factor to our capacity [for spirituality] — but it doesn’t stand alone to define our destiny. Each one of us has a choice.”

The existence of this choice is doubly extraordinary. First, it is extraordinary that an animal would evolve through material mechanisms in a material world, an openness to believing in the immaterial. Second, it is extraordinary that this willingness would remain voluntary, for if there is a material benefit to believing in things immaterial, then why would our biology not compel us to believe? Why would it not automatically confer on us the benefit of spirituality, like it has conferred on us the benefit of our self-preservation instinct?

The psychological answer to this puzzle seems to be that spirituality is more potent when it feels freely chosen. That feeling of choice — whether it involves actual metaphysical liberty or not — intensifies the experience of faith, of believing in something beyond logic or any other faculty of our mind to pin with certainty. Without that feeling, spirituality would lose its uplifting atmosphere of the ineffable. It would cease to be a jump beyond ourselves and would become a rote extension of our limbs.

This crucialness of choice presents a conundrum for would-be spiritual teachers such as James and Miller. On one hand, the teacher is called to aid her flock by pushing them to acknowledge a vaster purpose. On the other, if the teacher pushes too hard, she will diminish the experience she is trying to make available. So, even as she must challenge committed skeptics and the complacent faithful to glimpse beyond their comfortable dogmas, she must on no account impose her own metaphysical convictions. She must summon Isaiah’s fire without turning patriarch.

James’s solution to this conundrum is to join empirical “fact that the conscious person is continuous with a wider self” with a method of hypothesis: “[W]ho says ‘hypothesis’ renounces the ambition to be coercive in his arguments.” Miller’s solution is to combine neuroimaging with memoir. Neuroimaging taps into the manifest power of miracle, a truth we witness with our own eyes, producing an instant conviction that Miller dramatizes in her book’s opening scene of revelation, where fMRI brain scans of believers and unbelievers are juxtaposed in a Columbia Med School lab:

The brain on the left — the low spiritual brain — was flecked intermittently with tiny red patches. But the brain on the right — the brain showing the neural structure of people with stable and high spirituality — had large swathes of red, at least five times the size of the flecks of the other scan. The finding was so clear and stunning, it stopped my breath.

The counterpoise to this to see is to believe comes in the form of Miller’s memoirist style, which extends beyond her fMRI anecdote to configure her entire book as autobiography, a literary mode that allows her to venture past scientific consensus into personal faith disclosures: “We can live in isolation, or we can awaken to […] a deep, felt alignment with the source of consciousness.”

James notes in Varieties that mystic beliefs “usually are, and have the right to be, absolutely authoritative over the individuals to whom they come.” Which he then immediately juxtaposes with the remark that “mystics have no right to claim that we ought to accept the deliverance of their peculiar experiences.” Such inside-outness is scientific spiritualism’s own peculiar experience. On the one hand, the science tells us: “Spirituality has real effects that can improve your life […] and lives beyond.” On the other, it clinically reminds: “The spirit world may all be make-believe.”

Thus, science’s spirit-matter middle ground remains as contentious now as it was in James’s day. The pure materialists scoff: “Oh, this scientific spirituality is another opiate of the masses, a way for psychologists to elbow into the profiteering of megachurch evangelicals and new age charlatans.” The pure spiritualists scoff: “There is no God, no heaven in science’s brain-scan scripture — only cynical hedonism.” But from the perspective of our biology, such scoffing is anti-life. It attempts to foreclose the chance of mysticism — or to decide our gospel for us. Meanwhile science preserves spirituality’s deep paradox of emotional choice by urging us to leap, yet leaving the leaping up to us so that we can stand voluntarily agnostic — or jump like James and Miller into whatever scandalous faiths we feel.

The Awakened Brain: The New Science of Spirituality and Our Quest for an Inspired Life 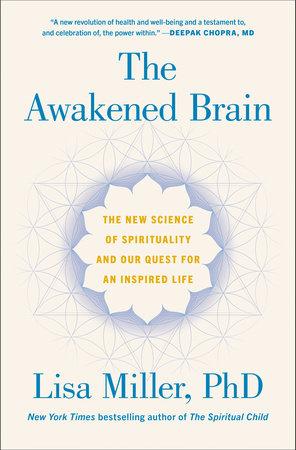