ILLUSION IS REAL, even if not actually truthful. Tennessee Williams’s The Glass Menagerie begins: “Yes, I have tricks in my pocket, I have things up my sleeve. But I am the opposite of a stage magician. He gives you illusion that has the appearance of truth. I give you truth in the pleasant disguise of illusion.” Illusion is magicians’s product, their craft, their tool. And central to its “appearance of truth” is a social system of secrets and surprise. Two recent books reveal the journeys and expertise needed to enter and participate in this unusual world.

Alex Stone’s Fooling Houdini: Magicians, Mentalists, Math Geeks & the Hidden Powers of the Mind begins with him having flamed out performing at a Fédération Internationale des Sociétés Magiques’ (FISM) World Championships of Magic event (which he strangely calls the Magic Olympics). Undeterred in his desire to become a skilled magician, Stone realizes he needs to learn more about not just the techniques, but the secret subculture, to learn about the world of magicians in greater depth.

The details of his progress are described in Fooling Houdini, as he leads us through various kinds of deception: mentalism, pickpocketing, three-card Monte scams, and mathematical magic. Along the way, side trips are taken to introduce us to Richard Turner, a blind close-up magician who amazes with his hypersensitive touch; to observe a psychology experiment at the New School illustrating misdirection and selective attention; and to exchange secrets with magicians at the back of a pizza parlor, in a magic store, in Las Vegas classes, and at Los Angeles’s famous Magic Castle.

Often these trips veer us off track: Three pages are devoted to speeding tickets and almost an entire chapter on clowning goes nowhere before it ends up switching to a discussion of mathematical magic. Despite some occasional insightful (but not too modest) ruminations about his sense of self as a magician and performer (and as a graduate student in physics), Stone’s breezy — and sometimes too slangy (“others say he’s just an asshole”) — writing remains superficial journalism. While providing interesting historical context to such things as three-card Monte and to some important magicians and classic magic books of the past, Fooling Houdini provides little depth.

The book in many ways is a personal memoir, with stories about meeting a girlfriend, getting a speeding ticket, sort of cheating at poker, or keeping up with his graduate studies obligations. Some may find his writing style a bit off-putting and self-aggrandizing. He “tells” you how nervous or unsure or confident he may be, but he doesn’t really “show” you. I always felt I was observing from the outside and never experienced what he was going through from the inside. Fooling Houdini privileges simple description over deeper analysis. He lists the seven magic conventions he attended, but never explains what they are all about or how magic culture is organized. Did he learn anything about magicians or the social structure of magic at these conventions? The reader remains a spectator, seeing magic through only one person’s eyes, without any sense of the interactions and interdependency the social system of magic requires.

Each chapter reads like a magazine article filled with many unsupported generalizations. He exaggerates the labels of just about everyone he encounters (the best of all time, the wunderkind, one of the world’s most acclaimed, the greatest living magician — even referring to two different magicians as “brilliant”) and oversells the importance of everything he seems to do. Almost a full page is devoted to a footnote about the symbolic value of the number seven, once it’s revealed that it takes seven (riffle) shuffles to really mix up a deck of cards. Yet a few pages later we learn that eight interweaving (faro) shuffles bring the deck back to its original order; (an equal-sized footnote could also be written about the symbols associated with eight). Such arbitrary diversions weaken the book.

Although the resources Stone consulted are listed on a website and not in the book (which also has no index to assist in finding topics and information), the vague and sweeping statements prevent you from engaging with the material. Is there evidence to support the notion that “When the market goes south, demand for mentalism rises as people seek solace and an easy escape from their woes”? Or that “There are more books on magic than there are about any other branch of entertainment”? While not necessary to fill the book with footnotes, such statements push my skeptical thinking buttons, intriguing as they may be.

As a memoir of sorts, it really is about Stone (and other mostly white male magicians), and less about the magic subculture. His chapter on secret knowledge, arguably a core element of magic, illustrates how far off he can be in understanding this community: “Magic stands alone in demanding blanket ignorance from its audience” and “magic exists in a kind of vacuum.” I would argue the opposite: Magic depends on people’s knowledge and experiences. Performing magic is a social interaction making use of the experiences and realities the audience brings to a magic show. The magician fabricates new realities that play with the rational sequence of quotidian expectations. To be successful, magic requires spectators to be knowledgeable about themselves and the world around them. Stone soon contradicts himself when he says magic tricks “exploit perceptual mechanisms that are etched into our brain.” It works because of certain psychological, social, and cultural experiences and knowledge we bring to a performance, but the reader gets the sense that he doesn’t fully understand the complexity of magic as social interaction.

Misreading the relationship between magician and audience also leads Stone to a flawed understanding of the role of magicians’s secrets, which he believes set up “an adversarial relationship between the magician and the audience.” In the book Trade of the Tricks, however, MIT anthropologist Graham Jones offers an alternative, scholarly take on the secretive world of magic.

(First, a disclosure: I was asked by the publishers to review this book when it was a manuscript being considered for publication. I praised it highly and share here some of my review. I have no financial or personal benefit in recommending this book.)

Jones’s study began as a PhD dissertation, and the 35 pages of references and endotes(and thankfully, an index) reflect the scholarship involved. Don’t let this turn you off — it is a readable, scholarly (with some academic jargon) and personal account of Jones’s two-year journey to understand a community of expertise and secrecy from the inside. In the long tradition of anthropologists, Jones immerses himself in another culture, this time hanging around magic clubs, street performers, cabarets, and magic communities in France. Unlike many books that focus on the psychology of magic and the motives of the individual, this book locates magic in a cultural and economic social system. We feel the subculture from within, not as outsiders.

Central to Jones’s argument in Trade of the Tricks is the paradox of secrets: Tricks depend on information that must simultaneously be concealed and revealed. Magicians reveal how to do their tricks to promising newcomers (and to other professionals), while also concealing — or partially revealing — secrets about new tricks they are developing. This interactive, dialectical process of sharing and concealing is essential to the formation of a community of magicians, as Jones expertly shows us throughout his book. It is the “social life of secret knowledge” — as one chapter is titled — that characterizes Jones’s key points. Stone misses this core social dynamic, focusing instead on a personal story or the power imbalance of secrets. The contrast between the books couldn’t be clearer.

For Jones, “tricks are also social accomplishments,” not simply individual achievements. Spectators, mostly ignored in Stone’s book, play an important role in Trade of the Tricks. Magicians must manage performances, create stage talk, and anticipate and negotiate audiences’s expectations by taking on the speaking roles and language of spectator and magician. Magic is a co-construction.

In addition, cultural expectations, often about power, are brought to the show, including ones related to age, gender, class, and race, among others. Jones captures these subtleties, especially about gender, and provides insights about the heterosexual masculinity embodied in the performance of magic (which Stone inadvertently illustrates through his writing style and content). Magic shows take place in specific historic times and spaces. In France, for example, state subsidies are available for art and for intermittent workers pay, a different climate than what magicians experience in the United States.

Power dynamics within the magic community are also insightfully discussed: the ever-present sense of fraternal solidarity and simultaneous competitive hierarchy of skill; the treatment of amateurs and the unique role of table-hopping magicians; and those who sell out by hawking products in supermarkets. The book is not just a descriptive account of these various kinds and styles of magic, it is a fascinating account of an anthropologist visiting another world.

Tricks of the Trade also captures, in a more universal way, the structure of many professions, performing arts, and careers that have insider secret knowledge, require accreditation of expertise, and demand some form of apprenticeship. It’s about the relationships between amateurs and professionals, men and women, the government and the arts, and those with and without secrets. Jones says that “becoming a magician transforms the way one sees the world.” And the same can be said when reading his book. Or, as Nietzsche put it in 1873: “Truths are illusions which we have forgotten are illusions.”

Trade of the Tricks 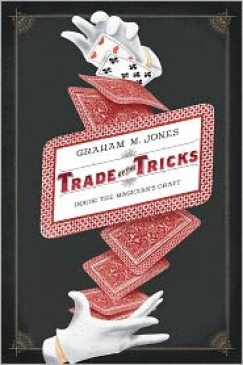 Magicians, Mentalists, Math Geeks & the Hidden Powers of the Mind 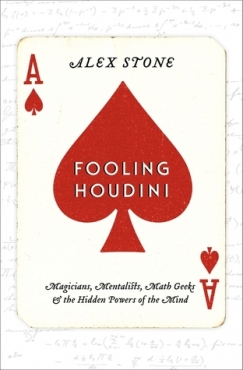