“THEY BEGAN THE decade by reporting the story, but by 1939, they were the story,” writes Deborah Cohen, describing the five American foreign correspondents at the heart of her new book, Last Call at the Hotel Imperial: The Reporters Who Took on a World at War.

The correspondents, John and Frances Gunther, H. R. Knickerbocker, James Vincent Sheean, and Dorothy Thompson, are bound together by “a common cause: the conviction that the ideal of journalistic objectivity revered by their elders and editors had to yield to a different, more personal sort of reporting. They wrote what they thought about the events in Europe and Asia and, just as importantly, what they felt.” A cast of supporting characters — including India’s first prime minister, Jawaharlal Nehru; the British writers Harold Nicolson and Rebecca West; Stalin’s mother; and an indignant Joseph Goebbels ­­— makes for a capacious book with the kind of material that practically cries out to be made into a limited series.

Cohen’s lucid prose makes for easy and engaging reading — one longs to lounge in the book’s eponymous hotel in Vienna:

At the café on the ground floor, the jewel merchants shared the back room with the gamblers and the musicians. A smattering of turpentine and flax brokers colonized the front. Reporters took the low-ceilinged, paneled room facing the street. In the giant mirror that filled its far wall, you could see who was coming and going: former Ottoman potentates and Montenegrin bandits, schemers, gunrunners, the Outs conniving against the status quo. There was an aroma of conspiracy about the place; it was said that the assassination of Archduke Franz Ferdinand had been plotted there. A white-gloved waiter oversaw the wooden cupboard in which sixteen Austrian newspapers and sixty-odd foreign papers hung on rattan racks.

On the one hand, Last Call represents something of a pivot from Cohen’s previous work, which has considered, from a largely British context, World War I veterans, interior decoration, and secrecy and shame. On the other, this book is a kind of capstone, where the themes of war, politics, and the personal (among others) mingle together. Indeed, Cohen’s latest book is a masterclass in playing with scale: individual lives and global affairs, the personal and the public brought together with each informing the other.

Cohen’s book is also a refreshing turn away from other popular narratives of the interwar years, too often overburdened with glitz and gimlets. “Unlike the conventional portrait of the Lost Generation — F. Scott Fitzgerald and Ernest Hemingway, drinking their anomie away at a Parisian café — the reporters turned to, not away from, the world.” While the subjects of Last Call certainly did their fair share of drinking and undoubtedly felt the estrangement of the anxious interwar years, they wanted desperately to see and report on a world at the edge of catastrophe for themselves. Among them, they seem to have interacted with every major figure of the 1920s and 1930s: Dorothy Thompson and the Roosevelts, Jimmy Sheean among the Bloomsbury Group, the Knick on William Randolph Hearst’s payroll, Frances Gunther’s correspondence with Nehru, and John Gunther’s chance encounter with the Prince of Wales — they really did get around.

While Cohen’s subjects worked to humanize their illustrious interviewees, Last Call is a mix of deification and iconoclasm. Its five subjects were prodigious reporters, the stuff of journalistic myth, particularly for their contemporary readers. But they also made errors in judgment (at times underestimating dictators or downplaying the threat of war), and were ultimately human beings, who struggled with addiction, loss, and messy personal relationships. And the book is at its absolute best when Cohen is able to delicately balance these truths.

Last Call is built on an impressive body of research, combining both these journalists’ professional output alongside the most personal recollections. “This archival jumble of private and public is a useful metaphor, a hallmark of their moment: the collapse of the boundaries between the geopolitical and the personal. As they immersed themselves in the world crisis, they found themselves channeling it in their own lives.” While some readers may bristle at the use of first names when referring to the book’s subjects — usually eliciting an unwarranted familiarity — it works generally well here given the deeply intimate nature of the stories Cohen tells us. The description of the months leading up to the death of the Gunthers’ 17-year-old son, Johnny, from a brain tumor are particularly gut-wrenching. John Gunther went on to describe those terrible years in his 1949 memoir, Death Be Not Proud, the only one of his books to be continuously in print.

Cohen often uses geopolitical events to get at how her subjects were feeling: she compares the Gunthers’ relationship, one of unequal power relations, mismatched from the start and each made worse for it, with the British in India. They wait for their divorce to be finalized with the same anticipation as waiting for news of Hitler’s surrender. “The idea that a dispute about world politics could finish off a marriage wasn’t by then a surprise to him,” she writes. “The fault lines that ran through a crumbling Europe, he and his friends had found, ran through their own lives as well.” The narrative sometimes verges on too personal, with occasional extended discussions of the correspondents’ sex lives and experiences with psychoanalysis, which sometimes miss the mark in a book that already has much to say.

If Last Call occasionally has too much going on, it is perhaps reflective of the period it considers. Writing on interwar Britain, the historian Richard Overy described those years as “a morbid age,” full of anxieties about politics, economics, war, and the self — a heady mix that can be found in Cohen’s book (though the latter is not, thankfully, all doom and gloom). The outbreak of the war, when it finally comes halfway through the book, is somehow both predictable and unexpected, earth-shattering and quotidian. In August 1939, John Gunther described Europe as a claustrophobic train, sealed and en route to uncertainty: “The window shades are drawn. The doors are locked. No one can see outside. Or even inside. No one can talk to the driver. No one knows who the driver is.” And almost as quickly as it started, the war ends as the personal lives of the five come once again to the fore.

The pacing of Last Call, however, is at times uneven. At its best, the book feels like the most vital, engrossing letter — Dorothy Thompson’s expulsion from Germany, personally ordered by Hitler, or Vienna on the eve of Engelbert Dollfuss’s assassination come to mind — while at others it becomes bogged down with historical events or minute details of its subjects’ lives. This is particularly acute after the prologue, which describes, with anxious intensity, the rush to board the New York–bound Nieuw Amsterdam in September 1939. The chapters that immediately follow, detailing the early lives of the book’s subjects, lack the same vigorous urgency. As Cohen herself writes, invoking Sheean, “The truth, as Jimmy put it, mattered more than a litany of facts. For Americans, it required a new way of imagining oneself in the world.” And it is when Last Call speaks to these changing worldviews and how its subjects worked to reshape American understandings of global affairs that the book indeed dazzles.

“The trick of reporting, as Dorothy put it, was figuring out what you wanted to know, and then finding the people who could tell you.” It’s unclear what exactly a reader of Last Call wants to know, but it certainly has a lot to tell us. Whether readers already have familiarity with these five foreign correspondents and the geopolitics of the 1920s and 1930s or come to the material with fresh eyes, Cohen’s intersection of the personal and the political has yielded a piece of work with broad appeal.

Perhaps most importantly for a book like this one, Cohen has written an exciting story — one that feels like a conversation between friends, overheard above the clinking of glasses and the peal of laughter in an overcrowded bar. In her own words, Cohen’s “aim as author has been to follow their own lead as journalists — to convey how it felt to live so exposed to history in the making.” To be sure, Cohen has exposed her subjects, rooting around in the archival morass to remind us that the personal and political (sometimes tedious but mostly titillating) are inextricably linked.

Thomas J. Sojka (@tomsojka) is a PhD candidate in history at Boston University, where he researches elite sociability, partygoing, and gossip in 1920s and 1930s Britain.

Last Call at the Hotel Imperial: The Reporters Who Took on a World at War 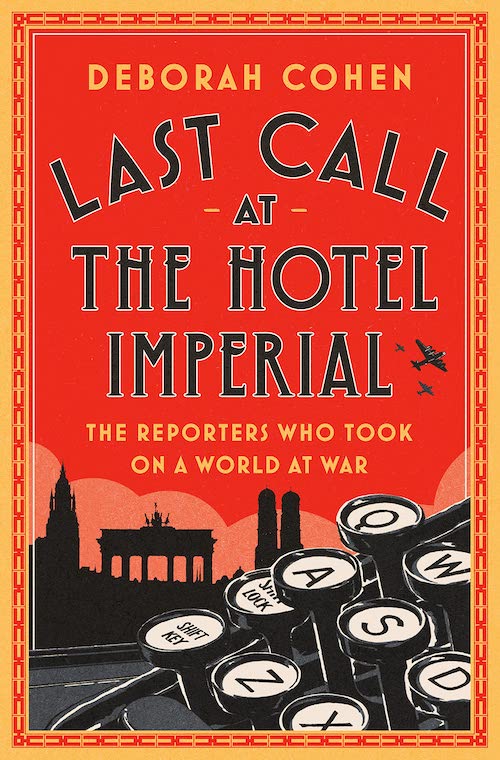