ON JANUARY 22, 2009, President Barack Obama signed his first executive order, promising to close Guantánamo Bay “no later than one year from today.” As can be seen from the videotape of that signing ceremony, he was less than clear on what was going to actually happen to the detainees, asking “Greg,” off camera, if there was a separate executive order regarding how they would be “disposing of the detainees.” He was reminded in a vague response, that they would be “setting up a process.”

What must count among Obama’s sharpest regrets is the way in which he mishandled his inheritance from George W. Bush. Just as Thirteen Days, the critically acclaimed history of Kennedy’s handling of the Cuban Missile Crisis, presents a case study in how to handle an international crisis, Obama’s Guantánamo presents a case study in missed opportunities.

Many may be tempted to attribute Obama’s failure in closing the camp to conservatives who outflanked him — even Obama has made this claim. Indeed, they passed legislation that made his job harder, cried “terrorism,” and sparked fear of transferring detainees. But Obama’s Guantánamo, edited by Jonathan Hafetz of Seton Hall Law School, which presents 14 essays from lawyers who work behind the scenes in the civilian habeas bar and the military commissions, makes the case that Obama lost his way more than once when he had the chance to do the right thing, and retreated to the same failed positions of his predecessor.

Candidate Obama campaigned heavily on the basis that he would close Guantánamo and restore the United States’s global leadership on the rule of law. Public opinion was so galvanized against the loss of constitutional rights that Guantánamo represented, that even candidate John McCain agreed before the election of 2008 that the detainee camp at Guantánamo Bay should be closed. At an estimated cost of $4 million per detainee per year, a majority of Americans agree with them both.

Yet as demonstrated by these personal essays from attorneys negotiating with the transition team and arguing with the administration’s Justice Department, Obama did not make the clean break that he suggested he would. For example:

Obama’s Guantánamo’s 14 essays range in style from the chatty first-person narrative to the sober assessment of policy. The attorneys range from corporate pro bono counsel to nonprofit attorneys and professors of law. (In full disclosure, this reviewer has represented a detainee since 2008.) Each provides an insight into a different facet of the maze that confronts those who agree to step into the representation of men held out as, but never proven to be, the “worst of the worst.” Franz Kafka is invoked more than once as the only way to explain the nonsensical processes that are served up to these attorneys as their only path forward. Success or failure seems less the result of good lawyering — although there is much in evidence — than the politics behind the US relationship with the detainee’s home countries. Yet the inside stories behind the headlines make for engrossing reading and will be an indispensable part of the public record of this phase in American history.

This book arrives just as President Obama has made a renewed push to clear and transfer as many men as possible before his term is up. From 242 men in Guantanamo Bay when he took office, to 122 men when some of the essays were written, we are now down to 80, and that number is shrinking monthly. With the knowledge that his term is indeed coming to an end, Obama has announced a new pledge to give more of the men an abbreviated hearing on whether they constitute a current threat to the United States and to transfer all those cleared, assuming the Department of Defense gives the green light. The hearings and transfers would leave only those charged with military crimes, or those deemed too dangerous to release but not capable of being tried, whom he would seek to transfer to the United States.

Whittling down the number of detainees held without trial in Guantánamo has undoubtedly been good policy. However, Obama’s plan still includes a role for indefinite detention without trial, an idea that before Guantánamo was completely anathema to the United States legal system. It violates not only our Constitution, which the authorities attempted to sidestep by placing detainees in our naval station in Cuba, but also international law. Obama may have inherited injustice, for which we can all sympathize. But we cannot set back civilized society and the rule of law by tolerating any plans to perpetuate impunity. We must demand what our principles require: either provide them with fair trials, or let the men go.

Anne Richardson is a civil rights attorney in Los Angeles. She is currently Director of Consumer Law Project at Public Counsel.

Stories from an Enduring Prison 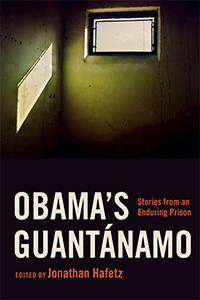