IT TOOK ME roughly six months to translate Captain Ni’mat’s Last Battle — a novel about a retired Egyptian air force pilot reckoning with long-repressed homosexual urges — from French to English. The book was published posthumously in 2011, in keeping with the wishes of the author, Mohamed Leftah, a Moroccan who emigrated to Cairo a few years before his death.

By most metrics, six months is short. I had no choice. I was tied to two concordant timelines: the first, contractual, and the second, biological, a seed in my womb growing into an embryo into a fetus into a baby.

Pregnancy, such an acutely female process, made my navigation through Leftah’s overpoweringly masculine universe harder than it might have been. Though it was always going to be hard. Captain Ni’mat’s Last Battle isn’t a long book — the original runs 150 pages — but it’s particularly difficult, stylistically and thematically.

In many of his works, Leftah’s primary weapon is sex, wielded to mock norms of gender and sexuality in both the Arab world and the West. Language is a close second. In Captain Ni’mat’s Last Battle, he joyfully blends vulgarity and erudition, alternating colloquial speech (“you like that, captain?”) with bombastic poetry (“ô the Manifold Splendor!”). In the latter phrase, the protagonist is celebrating his lover’s dick.

But Leftah was more than a provocateur. He was a writer with a mission, as grand as it was elusive: to carve out a decolonized and nonheteronormative system of existence — what the Moroccan intellectual and writer Abdelkebir Khatibi so succinctly, so perfectly, named the pensée-autre. Literally, the other-thought.

I understood Leftah’s mission, his simultaneous admiration and contempt for Islamic tradition, his coarse, dark sense of humor. But as my belly swelled, my femaleness undeniable, my physical state both immensely sexual and not at all, I struggled to get under his skin.

This shouldn’t have mattered. I shouldn’t matter.

Pared to the bone, literary translation is about substituting one word for another. More precisely, you identify the style, you research the context, you translate the book, and then you revise and revise and revise until the words sing, or lament, or rail, or whatever they’re intended to do.

Ni’mat is largely set in the Egyptian summer: stifling heat; sweat-drenched jalabiyas; dry, panting earth. I began translating in the fall, near the end of my first trimester, six months into the pandemic, self-isolating in Washington, DC, with my husband and three-year-old son.

Throughout the novel, Captain Ni’mat’s body knows things before he does: an accumulation of quivers and tingles that can’t be denied. Fingers are intertwined, and limbs are pressed against limbs as the call to prayer rings out. I found myself stymied by this physicality, grasping for the kinetic understanding that often leads to the perfect word. How do you convey wanting with just your lips? If your hands were branches amid blooming roses, would they float or sway? How hard would you grip your lover’s broad shoulders as you thrust from behind?

I know some of these motions, but not all. And also, I was distracted by constant reminders of my impending accouchement: swollen breasts, nausea, back aches. Tiny, impertinent kicks would interrupt my typing as though warning me that I was too tired, too pregnant, or too female to translate Leftah’s novel. Too something, in any case, or not enough.

You can’t ignore a body in rebellion forever — as Leftah’s protagonist is quite aware — but you can for a time. I don’t know what it’s like to live as a closeted Arab man, but I know French and I know it well. And so I focused on identifying, for example, the best equivalent for le sexe: member, organ, penis, dick, cock; transpercer: transfix, penetrate, run through; jaillir: spurt, gush, erupt.

For an entire morning, half-exasperated, half-amused, I pondered how to describe a penis’s personified trajectory — in the French, mouvant avec bonheur. Moving with happiness. But does a penis move happily? Joyfully? Could one be so bold as to describe it as gleeful? (One could, and I was.)

I decided that the hands in this book would “float” amid the rose branches, and that at the height of orgasmic bliss, it would feel as though one’s flesh was “liquifying” and “evaporating.” I chose to maintain the clinical terms of Leftah’s corporeal lexicon: crural, to describe the soft skin on a boy’s thigh; parturient, which means to be in labor, in reference to the howls uttered when penetration is too deep.

As winter steadily encroached into my city so far from Cairo, I assigned myself the task of researching Leftah’s elaborate metafictional universe: 11 novels and story collections that recycle allusions, characters, settings, and even exact phrases. Every discovery I made — an onomastic Easter egg or a buried reference to Rilke — induced delight, then confidence. These were objective things that I could identify and study in the soul-draining yet peaceful early morning hours before my toddler son woke up. Here, at least, the insistent presence in my womb was irrelevant, likewise my gender and sexual orientation.

Except it wasn’t just my body interrupting the process. My mind was uneasy as well, troubled by the story I was translating. My maternal mind, I mean.

Captain Ni’mat is just past 60 when he embarks on a sexual relationship with his domestic servant Islam, an adolescent boy of undefined age. The trysts, though consensual, are built upon an uneasy dynamic of power and attraction. When the affair is revealed — rather, that Ni’mat is a khawala, the passive partner — he is cast out by his wife, friends, and community.

I intellectually grasped why the novel hinged on a man-boy sexual relationship: Leftah is alluding to the pederasty accepted and at times celebrated in pre-Islamic society, and more subtly to an ancient Sufi tradition of sexually venerating young boys. More significantly, he is deliberately discomfiting his reader. Pay attention, he seems to be shouting, even if you don’t want to.

And I so wanted to pay attention. Except that, like the protagonist of Leftah’s final novel, I too was absorbed by matters of the flesh. For Captain Ni’mat, this means a distraction of radiant ivory skin, long limbs, a feline gait — the nonchalant allure of a teenage boy. His urges are primal, masochistic at times: submit. My drive, though also biological, felt like it was in total opposition: nurture.

I began having violent dreams: children harmed, babies lost. My maternal instincts manifesting, surely. But also, I thought, Leftah is seeping in. His novels are nothing if not tales of people harmed, of souls lost. I seethed at this intrusion into my precious hours of pre-dawn solitude. How dare he?

It’s poor form to hate a dead man, especially for his translator. But I confess that I hated him, on some days. It was a long winter. I didn’t always want to translate the sexualized depiction of an adolescent or, more broadly, the powerlessness of the individual against oppressive societal forces.

Of course, I didn’t hate Leftah because of the uncomfortable themes of his novel or the pressure of getting it — the words, the story, the mission — right. I hated him simply because he was hard, and I didn’t want anything else to be hard. The days were shortening and the COVID-induced isolation intensifying, and I was preparing to bring a child into what felt like an especially dark and scary world.

Thankfully, there’s a moment in every translation project when you get a gleam of what the book, the new book, will be. A déclic, as they say in French: a sudden realization or turning point. The term can also be translated, inelegantly, as “Eureka!”

Washington, DC, was buried in gray snow when I had my déclic. I could see an end to winter, to my translation, and most distant of all, to the pandemic. This was late in my pregnancy, when people, if I had seen any, wouldn’t have hesitated to congratulate me, no longer unsure if my bump was a bump.

I should have been stockpiling sleep, but I continued waking early, gray rings etched beneath my eyes, keyboard carefully perched on my belly, typing in that terrible blue glow. The novel no longer struck me as so tragic. By writing Ni’mat, Leftah was, is, showing his readers that while a truly free pensée-autre — a space for otherness, sexual or intellectual — doesn’t exist yet, it should and it could. Leftah rails but he also hopes. At the novel’s end, Ni’mat finds himself alone, but he gets to experience love, for a time.

Translation is often described in technical terms, foreignizing a text versus domesticating it, etc. Or else metaphorically: vessel, gateway, mirror, and so on. But if the translator is lucky, on rare occasions, there is something of the transcendent as well. A communion facilitated by time and familiarity and, for me, bleary mornings when the world goes silent for a while. When the body quiets as well. After spending so many months fighting the translation, I leaned into the violence and tenderness of Leftah’s final work, into its rage and its rapture.

I completed the translation a week before my due date, the gray rings now volcanoes. When the baby came, her entrance was urgent and rough: my skin torn and bruised amid a swell of blood and tears. Then, tiny fingernails clawing a cheek, teeth ferociously clamped on a nipple, a small, warm body curled against mine. Violence and tenderness, rage and rapture. And just like that, it was spring.

Lara Vergnaud is an editor and literary translator who currently lives in Washington, DC. 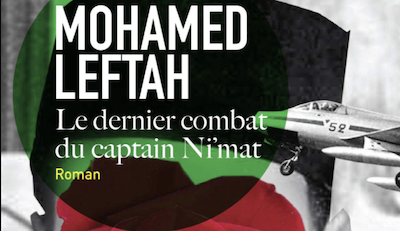 ADD TO YOUR BOOKSHELF