DERVLA MCTIERNAN’s THE MURDER RULE is a legal thriller based around the quest of a young law student (Hannah Rokeby) to prevent the man who ruined her mother’s life from getting out of prison. The novel’s shifts of plot and perspective raise questions of truth that are essential to the story, and they highlight the same kinds of questions about the stories with which we all prop up our own sense of truth and reality. The book is a departure from the Irish Australian writer’s previous work in both genre and setting: while the novels for which she is most known are a trilogy of police procedurals set mostly in the west of Ireland, her new novel is set in Maine and Virginia.

The novel begins with a sort of prologue: an email exchange between Hannah (a law student living in Maine) and Professor Robert Parekh (head of the Innocence Project at the University of Virginia School of Law). When the professor turns down her request for a job in the Project, Hannah responds with a reference to Parekh’s affair with a student, using the threat of exposure to ask him to reconsider her request. Parekh replies with a brief message telling her to report to his office when she arrives in Charlottesville. When Hannah confronts Parekh, he dismisses her threat but hires her anyway, explaining that he is looking for someone willing to break the rules and determined to succeed.

In the next chapters, Hannah further demonstrates her determination, her pragmatism, and her ruthlessness, attitudes and skills she has learned from law school and from growing up as the only child of an alcoholic single mother. She ingratiates herself to Professor Parekh by dealing efficiently with a backlog of cases, and with her analysis of one particular case that involves a mother convicted of felony murder in connection with the death of her child. It is that case that gives the first of two justifications for the book’s title: the felony murder rule, or simply the “murder rule.” The narrator explains:

Under the murder rule, when an offender accidentally kills someone while in the process of committing another serious crime […] the offender can be charged with first-degree murder. […] [T]he killer’s accomplices in the original crime can be found guilty of murder too, even if they weren’t physically present when the death took place.

The case of the mother prosecuted under the murder rule is not, however, the primary subject of the story. The second reference to the murder rule is more oblique: in a discussion among the students, Hannah argues that the murder rule is justified as a means of holding people responsible for the foreseeable consequences of their actions. But the primary case under review by the Innocence Project, and the case that Hannah is determined to disrupt, is the 2008 conviction and death sentence of Michael Dandridge for a 2007 rape and murder in Yorktown, Virginia. Hannah discovers that the case is being handled by a trio of the Project’s most experienced students, and she immediately sets out to befriend the group or, failing that, to find the weak link she can displace.

The early chapters dealing with Hannah’s arrival in Charlottesville and her work for the UVA Innocence Project are dated in the early fall of 2019; these chapters alternate with diary entries written by Laura, Hannah’s mother, dated in the summer of 1994. Laura tells the backstory to Hannah’s obsession with sabotaging the Innocence Project, in the form of Laura’s narrative of a summer romance with Tom Spencer. Laura was a cleaner at a Mount Desert Island resort in Maine, and Tom was a rich kid who had traveled to the island on his parents’ sailboat with his friend Mike. Hannah has, as we learn, discovered and read her mother’s journal, and everything she knows about Michael Dandridge comes from the diary’s portrait of Mike and news coverage of the original 2008 murder trial.

The actual Innocence Project is best known for reversing convictions based on DNA evidence that reveals errors in prisoners’ original trials, and DNA also plays a role in the Dandridge case. Evidence withheld from his original defense, a hair found on the victim’s body, has now been tested and was not a genetic match for Dandridge. But the DA and sheriff in the original case, still in office, have chosen not to release him but instead to retry him for the crime. Thus, the Innocence Project has provided new evidence that appears to exonerate Dandridge, but now faces the task of defending him in a hearing and possible full trial. That is the context for Hannah’s infiltration of the UVA Innocence Project, and that is the effort that she intends to thwart.

Hannah’s interactions with her fellow Innocence Project volunteers, particularly Sean and Camila, become a sort of Socratic dialogue: some of the most effective parts of the novel show Hannah arguing against the idealistic attitudes of the Project’s staff, as well as their assumption of Dandridge’s innocence. She is walking a tightrope between her conflicting goals of ingratiating herself with the team and keeping her disruptive goal in mind (as well as sniping inwardly at what she sees as their naïveté regarding innocence, guilt, and justice).

Each of the characters is completely enmeshed in their collective and personal version of the case, of the Innocence Project, and of their own truth. To Hannah, the members of the Innocence Project find it too “easy to put someone on a pedestal of innocence and blind [themselves] to their faults.” Hannah describes how “all of us […] want a hero. We want a bad guy. We want a beginning, a middle, and an end. And life is more complicated than that but we love it when we’re served up a story and sometimes if we don’t get it, we make it for ourselves,” and we only see “the facts that suit the story we like.” She is not herself, however, so aware or so critical of the stories she is telling herself, or the ones told to her.

Aside from Hannah’s subversive purpose regarding Dandridge’s chances of release, the story is a straightforward legal thriller, seemingly progressing toward a conclusion based on whatever the students or the DA can prove regarding Dandridge’s guilt or innocence. But about halfway through, two things happen that transform the story. First, Hannah and Sean, one of the most capable members of the Innocence Project team, find a witness who had disappeared after the original murder.

The second transformative moment occurs when the students visit the accused killer, still incarcerated in a state prison in Central Virginia. Hannah participates in these interviews with a complex constellation of attitudes and emotions, which is further complicated when she notices a single key detail of Dandridge’s appearance on one of these visits. Her perception of that small detail causes Hannah’s worldview to crumble around her, forcing her to forge a new kind of skepticism about the case, her prejudices, and the stories that have defined her life: “A crack had opened in her mind and now other thoughts were seeping through. Questions she’d pushed aside over the years were now demanding her attention.” The shift also poses questions to the reader about the stories we have been told: how would it change our idea of Laura if she had actually had an affair with Mike, the angry, drug-dealing bad boy in her narrative, rather than the rich and amiable good guy, Tom?

The last third of the novel is a three-way race over the weekend before Dandridge’s case comes before a judge for a preliminary hearing. The lawyers and students in the Innocence Project rush to contact witnesses and prepare their case; Hannah, now alienated from the Project, struggles to find the truth about Dandridge, her mother, and herself; and the antagonist rapidly moves to exert an increasingly violent pressure on the law students and on everyone else involved in the case. Right up to the end, there are twists that clarify details across the whole history of the Dandridge case, as well as Hannah’s own history. Some of the legal arguments in the climactic, dramatic scene in court strain plausibility, but I’m not a lawyer (and McTiernan is, or at least was), and the conclusion does tie together most of the story’s threads and legal twists. But no one, not Hannah, Dandridge, nor anyone else, comes out of the case looking either heroic or innocent.

Though McTiernan has previously written her novels in a series (a trilogy, at least), The Murder Rule is apparently a standalone. Most of the characters have lost the security of the stories with which they explained and justified their ideas and their lives, and Hannah in particular has burned all her bridges by the end. Any sequel would have to strike out in a new direction for all of the characters who are left standing. But even if The Murder Rule is McTiernan’s only story about her, Hannah’s considerable ruthlessness and determination make her one of the most memorable characters in current crime fiction.

Glenn Harper is the former editor of Sculpture magazine and reviews crime fiction at internationalnoir.blogspot.com. 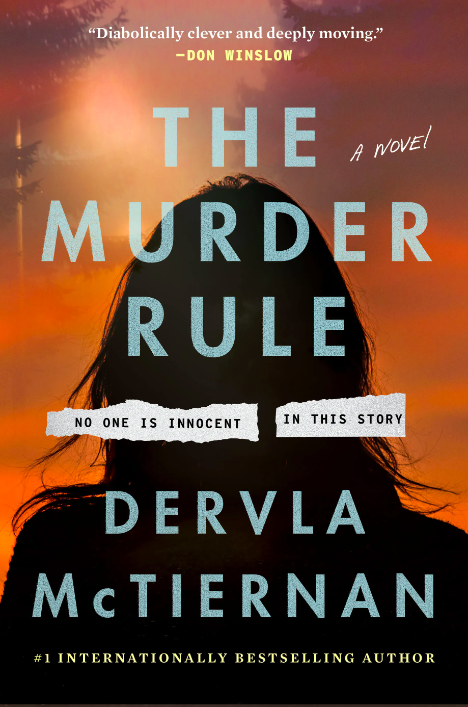