IN SUSPICION NATION, best-selling author Lisa Bloom has written two books and put them under one cover. The first book is a dissection of the Trayvon Martin case with a highly critical analysis of the prosecution’s presentation in People v. George Zimmerman. The second book is Bloom’s thoughts on hot-button issues, from gun control to the role of race in our criminal justice system. While Bloom may have intended for her examination of the Zimmerman prosecution to be the primary focus of her book, she really just uses it as a vehicle to share her opinions on a wider range of issues confronting the legal system today.

In the first half of her book, Bloom rails on the prosecutors for the inept job they did prosecuting George Zimmerman for the tragic death of black teenager Trayvon Martin. Indeed, there is no disguising that Bloom, who has never been a prosecutor, believes that she could have won the Zimmerman case. As a legal analyst for media agencies, Bloom had an up-close seat for the high-profile case. She obviously paid attention to every detail. She, like many others, would have tried the case differently. While some might view her criticism of the prosecutors as mere Monday morning quarterbacking, her insights can provide lessons for future prosecutors.

Using the perspective of the sole juror of color on the case, Bloom begins her book by asking the reader to understand how Zimmerman’s acquittal reinforced what many Americans, especially African Americans, instantly perceived — if George Zimmerman could get away with shooting Trayvon Martin, blacks did not have a true voice in the criminal justice system.

Bloom shares in that perspective and is not afraid to say so. She boldly writes:

Many people feel in their gut that this trial was a miscarriage of justice, and they’re often told to get over it because the jury heard all the evidence and reached a decision. I am here to say no, that in fact that gut feeling is correct, based on the evidence and the law as it should have been presented […]. Had the state of Florida done its job, this close case could well have gone the other way.

I wish I could be as certain as Bloom that Martin could not have seen Zimmerman’s gun because it was holstered behind his back. It does not take x-ray vision to see a gun if a person is not stationary. We honestly don’t know exactly what Martin could have seen because the parties were moving. Perhaps Bloom is correct, perhaps she is not. However, she rejects the possibility that another view of the facts might also be reasonable.

Bloom does a good job reviewing the evidence in the case. For readers who did not sit through the trial, this alone is a service. However, she also launches into diatribes against the prosecutors and the problems she has with the amount of power they possess. As a former federal prosecutor myself, I kept wondering whether she really had the expertise or experience to be so certain in many of her attacks. I was particularly surprised that Bloom felt confident enough to script what, in her mind, should have been the examination of witnesses in the case. Frankly, it would be easier for all prosecutors if courtroom examinations ran as smoothly as scripts in a movie or a book. However, in my experience, they rarely do.

Moreover, while Bloom had access to all of the evidence at trial, it is unclear whether she really knew all of the facts that influenced prosecutors’ decisions. For example, she criticizes the prosecutors for not lining up rebuttal experts to Dr. Di Maio, who, as she describes him, was “an amiable ‘hired gun’ medical examiner” for the defense. Is it possible that the prosecutors checked with other experts and they actually agreed with Dr. Di Maio?

Perhaps her most specious criticism comes when attacking Di Maio’s credibility because he had not “breathed a word” of his theory when he was on the Today show. With all due respect to the media, a morning talk show is not exactly the forum for witnesses to go into detail regarding their theories of a case. Bloom also writes her own script for impeaching Dr. Di Maio. While a fun read, as an evidence professor and former courtroom lawyer, I rather doubt that many of her questions would have been allowed, especially those probing whether jurors believed Dr. Di Maio’s testimony in prior cases.

Bloom loves pretend scripts. She writes them for many of the witnesses. She would have loved for the prosecution’s key witness, Rachel Jeantel, to have been asked: “Do you think this trial is a racial thing?” What she doesn’t include in her scripts are all of the objections that the judge would likely have sustained to many of her questions.

Finally, Bloom regales the reader with her own closing argument for the trial. It is dramatic. It also includes reversible error. For example, in her argument, she would have said to the jury, “But now we know the truth.” Prosecutors are kept on a tight rein when it comes to arguing what is and is not the “truth.”

And that is just Part One of her book.

In Part Two, entitled “Fear and Lawlessness in Suspicion Nation,” Bloom jumps into discussions of a wide range of issues. Volumes have been written about the role of race in the criminal justice system. Bloom offers her own chapter. Her insights are not particularly novel (for example, she writes: “Today, almost no one will admit to racial animus of any kind. […] And yet evidence of racial bias is around us”), but they are important. I applaud her for reminding us that regardless of the verdict in the Zimmerman case, we need to remedy the problem of racial injustice. Yet, in tackling the subject, she might be trying to do more than one book can do. Her observations careen from discussions of rampage killers, to NYPD stop-and-frisks, to myths about criminal behavior by African Americans.

Finally, Bloom cannot resist using the book to make an argument in favor of gun control. She makes some very good arguments, but they get lost because they are tucked away at the back of a 300-page book devoted to her personal commentary on nearly all aspects of the criminal justice system.

It is helpful that someone as committed as Bloom plays a major role in the media’s coverage of high-profile cases. With big issues on her mind, she may be able to refocus us during these cases on what really matters in our criminal justice system. Beyond Suspicion Nation, that would be her greatest contribution of all.

Laurie L. Levenson is a Professor of Law, William M. Rains Fellow, the David W. Burcham Chair in Ethical Advocacy, and director of the Center for Legal Advocacy at Loyola Law School. 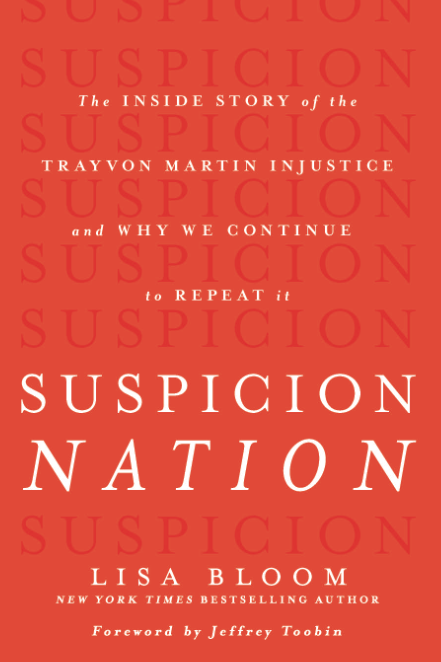