AFTER ENRIQUE PEÑA Nieto, then-president of Mexico, rejected Trump’s campaign assertion that Mexico would pay to “build a great wall” on the US-Mexico border, construction relied on US funding. Several contractors eventually vied for the controversial gig and the federal government purchased border wall prototypes to the tune of up to $500,000 per model. Many debated this country’s willingness to pay such an exorbitant price to keep others out. But walls also keep things in — and there’s a cost for that, too.

In 2018, writer and artist Raquel Gutiérrez traveled to Tijuana from their native Los Angeles to see the border wall prototypes, which, Gutiérrez notes in Brown Neon, were evaluated by US Customs and Border Protection based on “breaching, scaling, constructability, engineering design, and aesthetics.” Yes, aesthetics. Perhaps the idea of art and beauty in such close association with the politics of the Trump administration seems contradictory. One Swiss artist even went so far as to call Trump a conceptual artist. But recalling the work of land artists like Donald Judd, who installed large-scale concrete sculptures in the Chihuahuan desert of West Texas, Gutiérrez writes:

An antagonized reminder of history repeating all over itself, the border an exhausted hamster wheel, a Sisyphean crossing where migrants are only ever seen as laborers if they are seen at all. What else can we squeeze out of the border? You stop asking yourself how art could be involved in a fascist project. Art has never left its side.

Born in Los Angeles to immigrant parents from Mexico and El Salvador, Gutiérrez meditates on Southwestern terrains, art, family, and identity in Brown Neon, their debut essay collection from Coffee House Press — “part butch memoir, part ekphrastic travel diary, and part queer family tree.” Everything about this collection advocates for borderlessness, including its refusal to fall into simple categorization. Gutiérrez’s essays span space and time — from Los Angeles, Tucson, Tijuana, and San Antonio; from 2015 to 2019 — and back again.

Brown Neon’s title originates from the essay, “Behind the Barrier: Resisting the Border Wall Prototypes as Land Art,” in which Gutiérrez writes: “I am a brown neon sign: aimless aging homosexual hipster with attachment issues.” Throughout the collection, Gutiérrez’s awareness of their own hypervisibility within the political, cultural, and physical landscape as a queer person of color and first-generation immigrant remains centered. Yet the barrier between interior and exterior — between what is outwardly observable to Gutiérrez the writer, and what remains below the surface, deeply held, by Gutiérrez’s own self — is thin and permeable. In fact, Gutiérrez’s work is in constant motion, weaving between art criticism, queer history, cultural and political commentary, memoir, travelogue — a reminder that identity forms in relation, not isolation.

Driving back to Los Angeles from Tucson, Gutiérrez’s car battery light comes on in the middle of the Arizona desert, but pulling over isn’t an option. It’s 2015, five years since Arizona passed SB 1070, the so-called “Support Our Law Enforcement and Safe Neighborhoods Act,” which sanctioned racial profiling, allowing state and local law enforcement to demand immigration papers if they suspected a person was undocumented. As Gutiérrez notes in “On Making Butch Family: An Intertextual Dialogue,” “If we didn’t see the seeds of fascism being planted in this 2010 series of planned violences, then we weren’t looking hard enough. How, in 2010, could we not know that people we knew (or knew of) were already being disappeared?”

Such (arguably, non-rhetorical) questions are frequent in Brown Neon. These essays don’t simply speak, they invite the reader into an ongoing conversation with our past, present, and future. An essay can’t listen, but these come close, leaving room for questions left unanswered and realities left unlived. Not only does Gutiérrez consider their own culpability in systems of oppression, but they implore us to do the same.

“Do Migrants Dream of Blue Barrels?” opens in 2017 when Gutiérrez joins two volunteers with Humane Borders/Fronteras Compasivas for a simulation of the trek made by migrants crossing the border (Gutiérrez knows the organization’s recreation bears little resemblance to the real thing). Throughout the woven narrative, they contemplate the artist Karlito Miller Espinosa, whose installation works use cement bricks from near the Arizona border where migrant bodies have often been discovered, and Francisco “Paco” Cantú’s memoir, The Line Becomes a River, which recounts Cantú’s experience working as a US Border Patrol agent. Gutiérrez in turn considers their own familial history, including their Salvadoran-born brother’s decision to join the US military, the privileged position of their US citizenship, and the migratory traumas that continue to terrorize families and individuals through generations. They remind us there is no separating the political and the personal:

We are people connected to immigrants and migrants in deep and complex matrices — as their children, their lovers, their friends, their bosses, their customers, their neighbors, or if we are lucky, their students. Some of us will never know that direct experience of moving across harrowing terrain. We will never know the hard choices made to begin those journeys.

But while art and fascism are linked, so are art and revolution — both can be true, and the essays in Brown Neon never take a dualistic approach. The book’s final section, “La Mano Obra,” sharpens its focus on Southern Californian artists whose work confronts identity in some way. In “Vessel among Vessels: Laura Aguilar’s Body in Landscape,” an image of Laura Aguilar’s Nature Self-Portrait #14 precedes Gutiérrez’s exploration of their queer adolescence growing up in Huntington Park, and the cultural significance of the Plush Pony, an East L.A. lesbian bar where Aguilar took portraits of other Latinx lesbians. Another essay connects the work of straight-identified photographer Shizu Saldamando — who documents queer spaces, but only after receiving permission — with the crisis of consent at the center of #MeToo. Together, these essays wrestle with art as a promise of survival beyond existence — sustainable if we can (re)build a robust foundation.

However, and importantly, Brown Neon isn’t a meditation on queer or brown suffering, though it certainly acknowledges it. Rather, Gutiérrez’s writing asserts the humanity of brown and queer lives period, without any conditionality or dependent labels — queer lives lived in liminal spaces, brown bodies blurred in constant movement through and in between borders, both literal and figurative. It seems to ask what gets lost when we draw such lines. What might we build and what new kinds of formations are possible when we tear down the walls that separate us?

Recalling the work of Mexican American artist rafa esparza, whose exhaustive performances include installations constructed from adobe bricks, Gutiérrez learns brick-making in their essay “Stuck in the Adobe.” The work calls to mind the toil their father endured as an immigrant to the United States in the early ’70s. It’s body-breaking work at a time when their heart is grieving over a breakup with a former lover, but Gutiérrez is determined “to do [their] part in creating a relational map — to make, see, and share the worlds we could actually belong to if we could sustain the intimacy.”

Beginning with the opening essay, “On Making Butch Family: An Intertextual Dialogue,” the intimacy sustained through intergenerational, queer, and found family is central to Brown Neon. Gutiérrez explores their relationship with their late butch mentor — writer and human rights activist Jeanne Córdova, whom Gutiérrez calls “Big Poppa” — and Caleb, a trans boy adopted by Gutiérrez in a similar fashion. Throughout the essay, some of Córdova’s writings appear, punctuating the narrative of transitioning versus “remaining” butch, “as if the two were categories and not spaces we could walk in and out of in a given situational context.” Gutiérrez questions whether the reason we make art is, ultimately, to secure love. Despite mourning the loss of some of these relationships, “Baby Themme Anthems: The Werq of Sebastian Hernández,” which closes out the essay collection, provides an opportunity for a queer family reunion.

The borderlessness of Brown Neon is striking — in true ekphrastic style, one piece of art births another births another. Ambitious in scope and narrative structure, perhaps most impressive is the way in which it conquers such disparate terrain — loss, genealogy, geography, architectural history, desire, art and our impetus to make it — to reveal how much connection we all share. There is no way to separate the political from the personal, no wall that could keep us from bleeding into one another. By blurring these lines, Gutiérrez invites us to consider how walls and borders are illusory, arbitrary, and restrictive. Freedom, alternatively, is something in motion.

Rachel León is a writer, editor, and social worker. 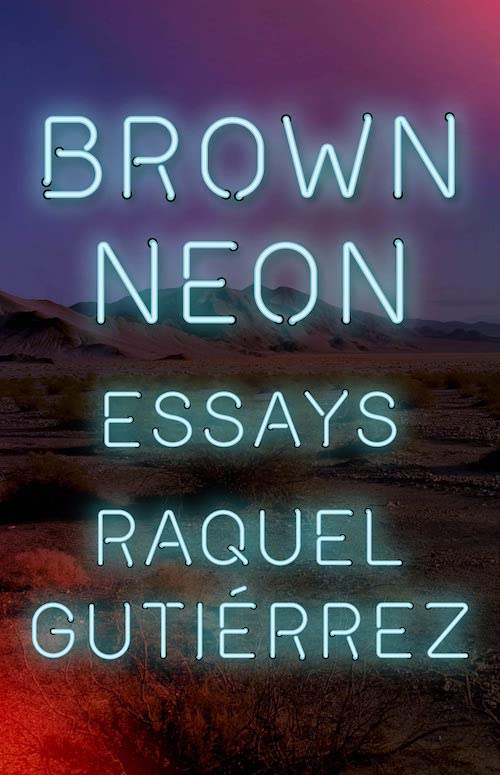