THE HISTORY OF the Indian subcontinent is full of eulogies for the Indo-Gangetic kingdoms, from the reign of the Guptas to the Muslims who established the Delhi Sultanate in the late medieval era. And the glory of the Mughal Empire in the early modern period needs no further popularization.

The chapters of the early medieval period have been mysteriously skipped, or have fallen prey to selective amnesia. Anirudh Kanisetti sets out to right this anomaly through his recent book, Lords of the Deccan: Southern India from the Chalukyas to the Cholas. We see the rise and fall of three major dynasties, which shaped the Deccan into the wealthiest and most potent of all kingdoms on the Indian subcontinent. The first part encapsulates the reign of the Chalukyas and is the most gripping and eye-opening of the lot. We learn about their innovative machinations to aggrandize and seize power in the Deccan plateau through religion, propaganda, war, diplomacy, and trade.

Chalukyas are credited with spreading temple-based Puranic Hinduism across Southern India, which was predominantly under the influence of Buddhism and Jainism. The Chalukyas commissioned some of the finest temples and sculptures in the Deccan, serving not just as religious sites but as gigantic monuments of political dominance and aesthetic supremacy. The temples were also tools for establishing the rulers’ divine connection with the gods residing in them. The first chief of the Chalke (crowbar-wielding agriculturalists) called upon priests to perform ancient Vedic rituals (reserved only for the aristocracy) and thus elevated his status to an independent monarch (Pulakeshin I of the Chalukyas). As Kanisetti writes,

He declared himself “Sri-Prithvi-Vallabha,” Fortune’s Favorite, Earth’s Beloved — the consort of both Sri, the goddess of fortune, and Prithvi, goddess of Earth, thus the equal of Lord Vishnu himself, who in mythology “embodied the virtues of kingship” by “preserving the Earth and the prosperity of the righteous.” It was a title that would become so closely tied to the Deccan that for the next five hundred years, its emperors would be referred to as Vallabhas.

Pulakeshin I pioneered the various stratagems that would become the rule book for expanding the kingdom across the Deccan. Through a close network of upper-caste priests, war allies, vassals, merchants, and propaganda artists, the Chalukyas maintained their dominance in the Deccan for centuries. The book shines a light on the fluid nature of power, as the Chalukyas used to be frequently challenged by members of their own clan, and the threat from the Pallavas of Tamil land always loomed large.

Although Lords of the Deccan gets repetitive, with polity and monarchs that change but ploys that mostly remain constant, Kanisetti intersperses his book with intriguing anecdotes on art, architecture, foreign trade, and insights into the minds and idiosyncratic lifestyles of the rulers. One of the revelatory sections details the imperial role of queens in the Deccan. They were not mere eye candy, and some of them enjoyed authority second only to the king. The most famous queen from the Deccan, Loka-Mahadevi, is credited with commissioning the Lokeshvara temple at Pattadakal in the seventh century CE, a UNESCO World Heritage Site.

But whatever the Chalukyas did, the Rashtrakutas could do better. The rock-cut Kailashanatha or Krishneshavara temple at Ellora Caves, commissioned and completed by the Rashtrakutas in the eighth century CE, is considered one of the most remarkable cave temples in the world. If the Chalukyas solidified their dominance over the Southern peninsula by warding off threats from North Indian rulers, then the Rashtrakutas went one step further. Under Dhruva’s reign, they bulldozed the Pratiharas and the Palas of the Gangetic and Yamuna plains, respectively, and cemented their overlordship in all of North India.

The most captivating account in Kanisetti’s book is reserved for Vallabha Amoghavarsha, perhaps the most iconic of all Deccan emperors. Ascending to the throne as a teenager, Amoghavarsha dominated the Deccan for over 60 years in the ninth century CE, a feat no other monarch before him had managed and none after him would be able to repeat. He not only used militia aggression to cement his sovereignty but also wisely relied on diplomacy and trade to propel his ambitions. Under him, the Deccan witnessed its most glorious trade period with local and international merchants. Clearly awed by what he saw at the Rashtrakuta capital of Manyakheta, one Arab visitor wrote:

In that city, there are for the ordinary people one million elephants which carry the merchandise. […] In this temple, there are about twenty thousand idols made of a variety of precious metals […] and various carved stones mounted with shaped and artistically worked precious jewels.

The Arabs considered Amoghavarsha one of the Four Great Kings of the World, his only other rivals being the Byzantine emperor, the emperor of China, and the Abbasid caliphate. He brought together an unprecedented concentration of poets and teachers to decorate his court at Manyakheta. But the most outstanding achievement of the Vallabha lies in his pioneering endeavor to elevate the status of the vernacular Kannada language at par with the cosmopolitan Sanskrit, the domain of urban and courtly elites. With the help of his court poet Srivijaya, a manual of courtly Kannada grammar, Kavi-raja-margam (“The Way of the King of Poets”), was composed with qualities comparable to the elite literature of the Sanskrit Cosmopolis. For all future Kannada poets — down to this very day, when there are more speakers of Kannada than the entire population of some countries — this moment would stand out as “a rupture in time, a moment of discontinuity when something new began.”

The third and final part of the book spotlights the Cholas who built the greatest thalassocracy empire in the history of India, with territories stretching up to Malaysia and Indonesia. And, just like the other Deccan dynasties, their patronage of literature and architecture resulted in some fabulous creations. The medieval Cholas are best known for constructing the magnificent Brihadisvara temple at Thanjavur, commissioned by the most famous Chola king, Rajaraja Chola, in 1010 CE. However, the glorious reign of the Vallabhas of the Deccan would eventually end by the 13th century, paving the way for Muslim invaders to establish the Deccan Sultanates.

With Lords of the Deccan, Anirudh Kanisetti has brushed off the dust from several unopened chapters of Indian history, where the myths of the subcontinent reside. The art, literature, architecture, military, and economic might of the Vallabhas eclipses that of the North Indian rulers, who find disproportionate mention in history books. Kanisetti’s blistering book might be the pioneering force in unraveling many more legends of the Deccan.

Arun A. K. is a writer from Mumbai. His work has appeared in BOMB, ArtReview Asia, The Art Newspaper, The Week, MUBI’s Notebook, and Cinema Scope, among other publications. He tweets at @arunusual.

Lords of the Deccan: Southern India from the Chalukyas to the Cholas 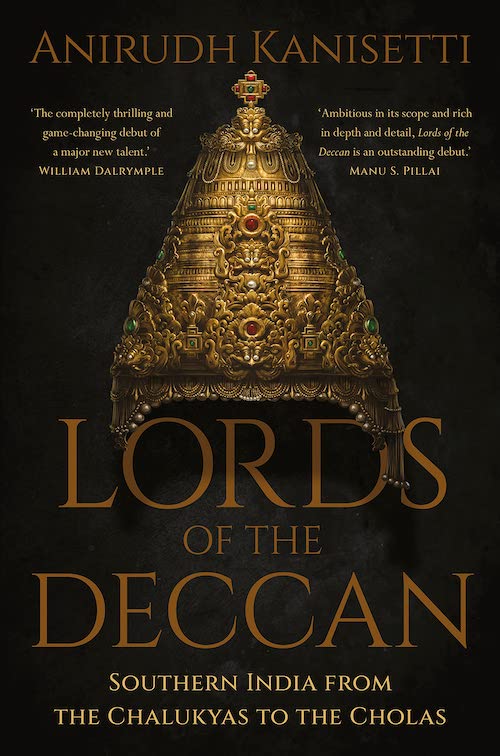