HAVE YOU NOTICED a flurry of blogs, books, and conferences touting Stoicism? Much of its wisdom you’ve read or heard in other cultural wrappers, especially cognitive behavioral psychology. And much of it is unfamiliar and astonishingly useful. It has given me moments of freedom from pernicious modern ideas on the biggest of questions: how to love, how to bear loneliness and anxiety, and how to think about death.

Massimo Pigliucci, an Italian-born philosopher at City College of New York, is a leader in this movement. He leads free workshops on Stoicism and regularly blogs about it, as in a piece for The New York Times philosophy forum “The Stone” in 2015, entitled “How to Be A Stoic.” As he explains there, Stoicism was born in Ancient Greece around 300 BCE and became popular self-help in Rome through Emperor Marcus Aurelius, who died in 180 CE. It competed with other Greek philosophies and had an enduring influence on Christianity.

Epictetus, Pigliucci’s hero, is best known for a dictum rather close to the “Serenity Prayer” — “God grant me the serenity to accept the things I cannot change, courage to change the things I can, and wisdom to know the difference,” which we now associate with Alcoholics Anonymous. To translate Epictetus, “Some things are in our control, while others are not. We control our opinions, choice, desire, aversion, and, in a word, everything of our own doing. We don’t control […] everything not of our own doing.” The Protestant theologian Reinhold Niebuhr apparently thought he had divined up the idea of the “Serenity Prayer” on his own, though he admitted he might have been influenced. (For a discussion of the origins of the prayer, see this account by Fred Shapiro, author of The Yale Book of Quotations.)

It’s easy enough to understand that you don’t need that opening phrase, “God grant me,” to welcome serenity, courage, and wisdom as promised by the Serenity Prayer. Pigliucci gives us an example of applying Epictetus’s God-free version after a thief stole his wallet on a train in Rome. Before he became a practicing Stoic, he confesses, he would have been angry for hours. Instead, he was grateful he still had his phone and could use it to cancel his cards — and enjoyed his evening.

“[I]f we understand the ancient Greek concept of amathia,” he writes, “we know that it is more helpful to think of people who do bad things as mistaken and therefore to be pitied and helped if possible, not condemned as evil.” In Christianity, the rule is to hate the sin, not the sinner.

What about when the ignorant wrongdoing of others hurts you more seriously? Consider the drunk driver who kills your daughter, the light of your life. Would this approach still be helpful? Actually, yes — it does seem that forgiveness is a blessing to the forgiver. The anger remedies of the American Psychological Association (APA), Pigliucci points out, closely resemble the early intuitions of the Stoics. Seneca, another Stoic hero, advised taking a deep breath and going for a walk when first feeling rage. Yes, that was written down in the middle of the first century in Rome! People are people.

If anger is your issue, Pigliucci’s bullet list of Seneca’s recommendations may give you a new trick:

For the longer run, the Stoics (and the APA) advise us to turn “demands into desires” and “focus on your own choices rather than the outcome.” “I desire a promotion, so I’m going to do my best to deserve it,” not “if I don’t get a promotion, I’m quitting.” We can do some problem-solving rather than complaining while looking at the whole picture, including all that we can’t control. Sometimes there is no solution available, at least to you.

The “fundamental Stoic idea,” Pigliucci says, is realism and good reasoning. Learn how things work, rather than how you wish they would, and make your choices. If we are anxious it is because we want things that may not arrive or stay, though we can do our best to influence the outcome — social or romantic acceptance, health, money. The answer is to accept uncertainty.

Loneliness, through this lens, comes from feeling in need of help you lack. It’s really helplessness combined with a sense of isolation.

That’s not the usual idea — we think of loneliness as arising when you are alone more than you want to be or have recently lost a close tie, or are anxious about the quality of your ties, which might have nothing to do with how capable you are of addressing your problems. But when I think about this more, the Stoic definition is useful. Imagine someone who was used to having her late husband do the taxes, feeling lonely as April approaches — and although it sounds obvious, she might not realize that calling an accountant would alleviate her loneliness. In fact, she might put off calling the accountant or learning tax software because she doesn’t want the reminder that her husband is gone. That would be just the wrong thing to do, according to the Stoics. In effect, her procrastination would demonstrate a fantasy that she can bring him back by pretending he isn’t dead (forgetting what she can’t control).

When it comes to a thornier problem, the remedy may be to accept that it can’t be solved by your own actions — and avoid the extra unhappiness of longing for the person who would solve it for you or berating yourself for not having attracted this problem-solver into your life.

Overcoming anger, anxiety, loneliness, and longing all take training, Pigliucci asserts: we are to think of emotion regulation the way we’d think of learning to drive a car or play the sax. We need lessons and practice. You’re likely to make mistakes but improve over time. “True philosophy,” he writes, “is a matter of a little theory and a lot of practice.”

I promised you a revelation on how to love and think about death. Pigliucci explains that to the Greeks, Eros is the appreciation of beauty everywhere — beauty with a big B — through a single person. We tend to think of attraction and good sex as mysterious matters out of our control. The ancient idea puts responsibility back on us — instead of saying you’re only attracted to a “type,” you can open your heart and look at what artists over the years have found beautiful. My personal experience bears this out. I can think of three people I considered ugly. When I let go of the idea that this was a problem, I had magical, memorable sex with them. They transmuted to beautiful in my eyes. I now know this is possible and see everyone differently — when I remember.

Of course, the Stoics also would never buy the romantic trope of helpless love for “the one” who is out of reach.

Then there’s death. Stoicism instructs us to contemplate our own death, and the deaths of loved ones. What if you were to casually start sentences with “When Janet dies…”? The one time I came close, people were horrified. It’s as if admitting someone will die is suggesting you’re looking forward to it. But I’m not. I’m just not living the fantasy of perpetual health and life that pervades our times.

Stoicism may not be for you — but the collection of ideas you’re living through (we’re all goldfish in our bowls) isn’t inevitable either. Pigliucci makes it easy to see that, by listing five other Hellenistic schools of philosophy, each with a punchy paragraph. Do not scorn this! You probably accept tenets of Aristotelianism, Cyrenaism, Epicureanism, and Cynicism, without seeing their logical implications. The Epicureans would embrace modern foodieism, but they considered mental pleasures superior to bodily ones, and the philosophy involved cultivating friendship and mastering desire. So don’t just perfect your restaurant selection — choose your company, cultivate conversational skill, and don’t overeat.

Also recognize that politics makes people unhappy. As Pigliucci notes, the Stoics urged us to engage in public life. The Epicureans “counseled withdrawal from social and political life (because it was much more likely to bring about pain than pleasure),” he writes.

So is it okay to stop reading the news and marching and donating and focus on simple pleasures? I’m not quite there myself. I’m still trying to be a Stoic.

Temma Ehrenfeld is an independent journalist reporting on psychology and health. Her work has appeared in The Wall Street Journal, The New York Times, Newsweek, Reuters, and Psychology Today.

How to Be a Stoic 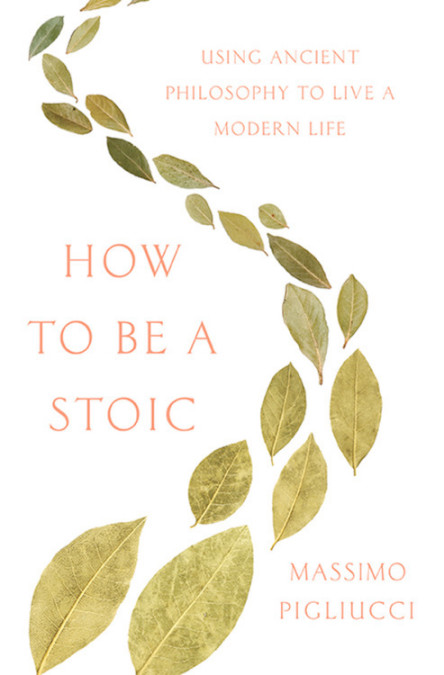