TO ARABS IN the diaspora, the story is a familiar one — it rings in our ears. In it the political clashes with the personal, and conservative or radical Islamist forces are pitted against the liberal or secular. The romantic pull toward our motherlands is overpowered by realities that drove our ancestors away from them in the first place. As those ancestors die, one after the other, fragments of our identity are buried along with them. So we are left to ask ourselves: What has become of home? Then, crucially, over time: How do we even define home?

Arab homes are indeed unlasting, on grounds shaken by dictatorial, colonial, fundamentalist, or occupying forces. But in An Unlasting Home, the debut novel by Kuwaiti writer Mai Al-Nakib, the familiar narrative is given a spin so fresh and unsettling that it will enchant you from the first page and linger for days after reading.

The multigenerational novel tells the story of Sara Tarek Al-Ameed, a 41-year-old philosophy professor at Kuwait University. Sara is accused of blasphemy by government authorities and arrested for teaching her seemingly conservative students the godless ways of Nietzsche. A change to an existing law makes the crime punishable by death, and so the accusation throws her life into disarray. Al-Nakib writes in an author’s note that while a similar amendment to the country’s penal code was proposed and passed by the National Assembly of Kuwait in 2013, the emir vetoed it. Her fictional account forces readers to “imagine otherwise” as we consider an alternate reality that isn’t too far from reality, and that indeed exists in neighboring countries including Saudi Arabia and Iran. “Like Sara, I am a professor at Kuwait University, so I wanted to consider what it might feel like to stand accused under this law that almost was,” the author said by email. “Kuwait was and remains, in many ways, a religiously conservative, patriarchal country, so it’s not an impossible notion.”

Besides reckoning with her personal safety and freedom, Sara must confront her choice to return to her country of origin after having sought a graduate education in the United States and taught at the University of California, Berkeley, in a tenure-track position. The novel thus focuses on Sara’s complicated relationship with her homeland, and with that, the layers of her past, the past of her mother, and the past of her grandmothers.

That Sara is a woman constrains her even further. In one scene, she is reprimanded by a colleague, a professor of Islamic law, for wearing a skirt. Her students are draped in black, mostly espousing the views of their bearded patriarchs (the stark contrasts that the reader is presented with here feel somewhat obvious and lacking in nuance, perhaps intentionally so). “Once upon a time, I dreamed of being unbound,” Sara says, “I wanted to be free but couldn’t manage it. My brother could. My mother could not. My father could. My grandmothers could not.”

That said, Sara’s life in Kuwait is, relatively speaking, a privileged one — albeit overly structured and somewhat isolating. She lives with her cook Aasif, her home helper Maria, her cat Lola, and her grandmother’s parrot Bebe Mitu. Her partner Karl lives in Norway, and her brother Karim, in the United States. Her late mother’s literary legacy lives on through her; she continues to run a bookstore named Curiosity Bookshop, which her mother had opened and operated under great difficulty due to threats of censorship. (Al-Nakib’s collection of short stories, The Hidden Light of Objects, was banned in Kuwait in 2017, along with several other books.)

Sara’s story focuses on the aftermath of her arrest and humdrum interactions with her lawyer as she prepares for her defense. While gripping, the story line is perhaps the least enchanting in this deftly written book. Al-Nakib is a short story writer, and that comes through in her novel and its winding structure. As a result, the flow can occasionally feel jarring, as the novel jumps from person to person, across time periods and continents. That said, the various strands do come together seamlessly toward the close of the novel. As Sara notes, “to proceed forward requires periodic turns back, even if those turns are denied, even if they hurt like hell. The past persists like a wound. If it isn’t locked in place, it knocks around endlessly, without reprieve.” (A series of appending family trees and maps, which illustrate the various migratory routes taken by the women protagonists, come in quite handy; I frequently returned to them for clarity.)

The interwoven family history includes the stories of Sara’s two grandmothers, Mama Yasmine and Mama Lulwa, and her own mother, Noura. The accounts stretch back a century, grounding readers in Lebanon, Iraq, Turkey, India, Kuwait, and the US, tracing the personal and regional political developments that shape the protagonists’ lives and their movements. The book has an exceptionally strong sense of place that is at once immersive and spellbinding. As a Sidonian myself, I particularly appreciated the ways in which Al-Nakib captures the allure of the Lebanese port city and that of Ziri Island, a tiny strip of land just off the coast, cherished by locals and little known by foreigners. The author brings to life Kuwait’s pearl industry, its eventual collapse, the country’s seafaring culture, the outbreak of the Gulf War and its fallout, as well as how those events impacted the lives of the protagonists.

The women, all of whom have ties to Kuwait, are fiercely committed to their families, while at the same time contending with societal and religious obligations. Wanting to nurture their personal freedoms without poking the patriarchal bear, they reach compromises that are for the most part too steep to be fair to them. All of them are forced to migrate at various points, partly due to the personal, partly due to the historical and sociopolitical. The migrations trigger fractures and discontent whose ripple effects trickle down to Sara, decades later.

With Sara, they manifest clearly as a bifurcated identity: the professor is committed to the land of her ancestors, while appreciative and respectful of the sacrifices made by the women in her life. Those sacrifices paved the way for her freedom, for her to live her life as she pleases, within the bounds of Kuwaiti society. “If they knew my story, the women who made me, they wouldn’t be disappointed,” she reflects. “They would gather me into their generous arms, and then they would release me.” That struggle crests when Sara must decide whether to recant the contents of the lecture that landed her in trouble. But in doing so, would she be undoing decades of progress, and betraying the women central to her life? And what next? Crucially, Sara is one of the only Al-Ameed family members to remain in Kuwait.

Perhaps most fascinating in An Unlasting Home is the story of Maria, Sara’s childhood ayah, or nursemaid, and later home helper who hails from Poona, India. The South Asian connection from a business and trade perspective, as well as an interpersonal one, is illuminating. Maria is like a second mother to Sara, with the two growing closer after Noura’s unexpected death 11 years prior. Across the Middle East, in countries including Kuwait, Saudi Arabia, Lebanon, and Jordan, the Kafala or “sponsorship” system facilitates the employment of foreign workers, predominantly from Asia and Africa, meeting a demand for cheap labor. In this unregulated system, migrant workers’ employment situation and immigration status are handed over almost entirely to private citizens, making them vulnerable to exploitation, racism, and abuse. The migrant workers often endure these dire circumstances to provide for their families back home. While Al-Nakib does not explore these exploitative elements, or the system per se, as Maria is treated relatively well by her employer, we do learn about the desperate situation that propelled her to leave her hometown, and the complicated long-distance relationship she developed with her children as a result.

At its core, An Unlasting Home explores intergenerational trauma and how it manifests and is passed along, from parent to child, punctuating lives beleaguered by a violence “so persistent, it’s the stuff of fairytales, the ones where children end up in ovens or inside the stomachs of wolves…” Its epic family saga style echoes that of Hala Alyan’s Salt Houses and The Arsonists’ City, Ayad Akhtar’s Homeland Elegies, and Min Jin Lee’s Pachinko.

Ultimately, this is a book that pays homage to one’s ancestors, and that reminds us that through them, and their push for better lives, we can draw strength. Reading on, I found myself pondering the sacrifices made by my own mother, grandmothers, and great-grandmothers, and the precarious paths they took from Alexandria to Palestine, Palestine to Sidon, Damascus to Sidon, and from Sidon to the United Kingdom and back, paving the way for the privileged life I now live in Brooklyn (while I long for Lebanon). I owe my freedoms to them — and my motherland is wherever my mother is.

Zahra Hankir is a Lebanese journalist who writes about the intersection of politics, culture, and society in the Middle East. She is the editor of Our Women on the Ground: Essays by Arab Women Reporting from the Arab World, and her forthcoming book, EYELINER: A CULTURAL HISTORY, will be published by Penguin Books and Vintage Books in 2023. 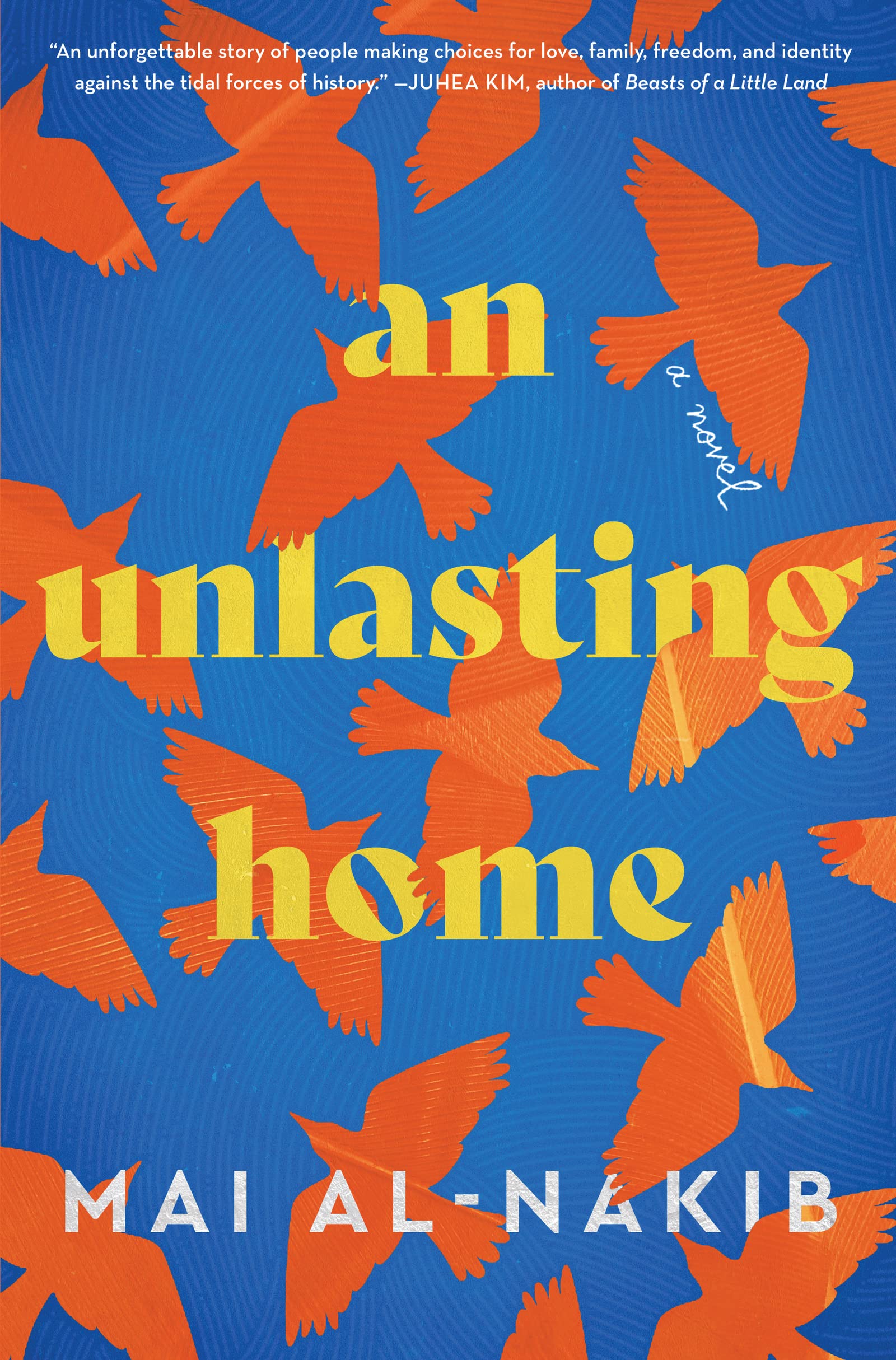